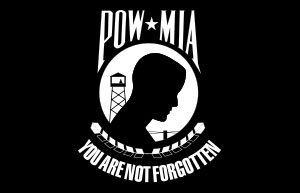 In 1971, Mrs. Michael Hoff, the wife of a U.S. military officer listed as missing in action during the Vietnam War, developed the idea for a national flag to remind every American of the U.S. servicemembers whose fates were never accounted for during the war.

The black and white image of a gaunt silhouette, a strand of barbed wire and an ominous watchtower was designed by Newt Heisley, a former World War II pilot. Some claim the silhouette is a profile of Heisley’s son, who contracted hepatitis while training to go to Vietnam. The virus ravaged his body, leaving his features hallow and emaciated. They suggest that while staring at his son’s sunken features, Heisley saw the stark image of American servicemembers held captive under harsh conditions. Using a pencil, he sketched his son’s profile, creating the basis for a symbol that would come to have a powerful impact on the national conscience.

By the end of the Vietnam War, more than 2,500 servicemembers were listed by the Department of Defense as Prisoner of War (POW) or Missing in Action (MIA). In 1979, as families of the missing pressed for full accountability, Congress and the president proclaimed the first National POW/MIA Recognition Day to acknowledge the families’ concerns and symbolize the steadfast resolve of the American people to never forget the men and women who gave up their freedom protecting ours. Three years later, in 1982, the POW/MIA flag became the only flag other than the Stars and Stripes to fly over the White House in Washington, D.C. On August 10, 1990, Congress passed U.S. Public Law 101-355, designating the POW/MIA flag:

“The symbol of our Nation’s concern and commitment to resolving as fully as possible the fates of Americans still prisoner, missing and unaccounted for in Southeast Asia".

Congress designated the third Friday of September as National POW/MIA Recognition Day and ordered prominent display of the POW/MIA flag on this day and several other national observances, including Armed Forces Day, Memorial Day, Flag Day, Independence Day and Veterans Day. The 1998 Defense Authorization Act (P.L. 105- 85) mandates that on these national observances, the POW/MIA flag is to be flown over the White House, the U.S. Capitol, the Korean and Vietnam Veterans War Memorials, the offices of the Secretaries of State, Defense and Veterans Affairs, offices of the Director of the Selective Service System, every major military installation (as directed by the Secretary of Defense), every post office and all Department of Veterans Affairs (VA) medical centers and national cemeteries. The act also directs VA medical centers to fly the POW/MIA flag on any day on which the flag of the United States is displayed.

When displayed from a single flag pole, the POW/MIA flag should fly directly below, and be no larger than, the United States flag. If on separate poles, the U.S. flag should always be placed to the right of other flags. On the six national observances for which Congress has ordered display of the POW/ MIA flag, it is generally flown immediately below or adjacent to the United States flag as second in order of precedence.